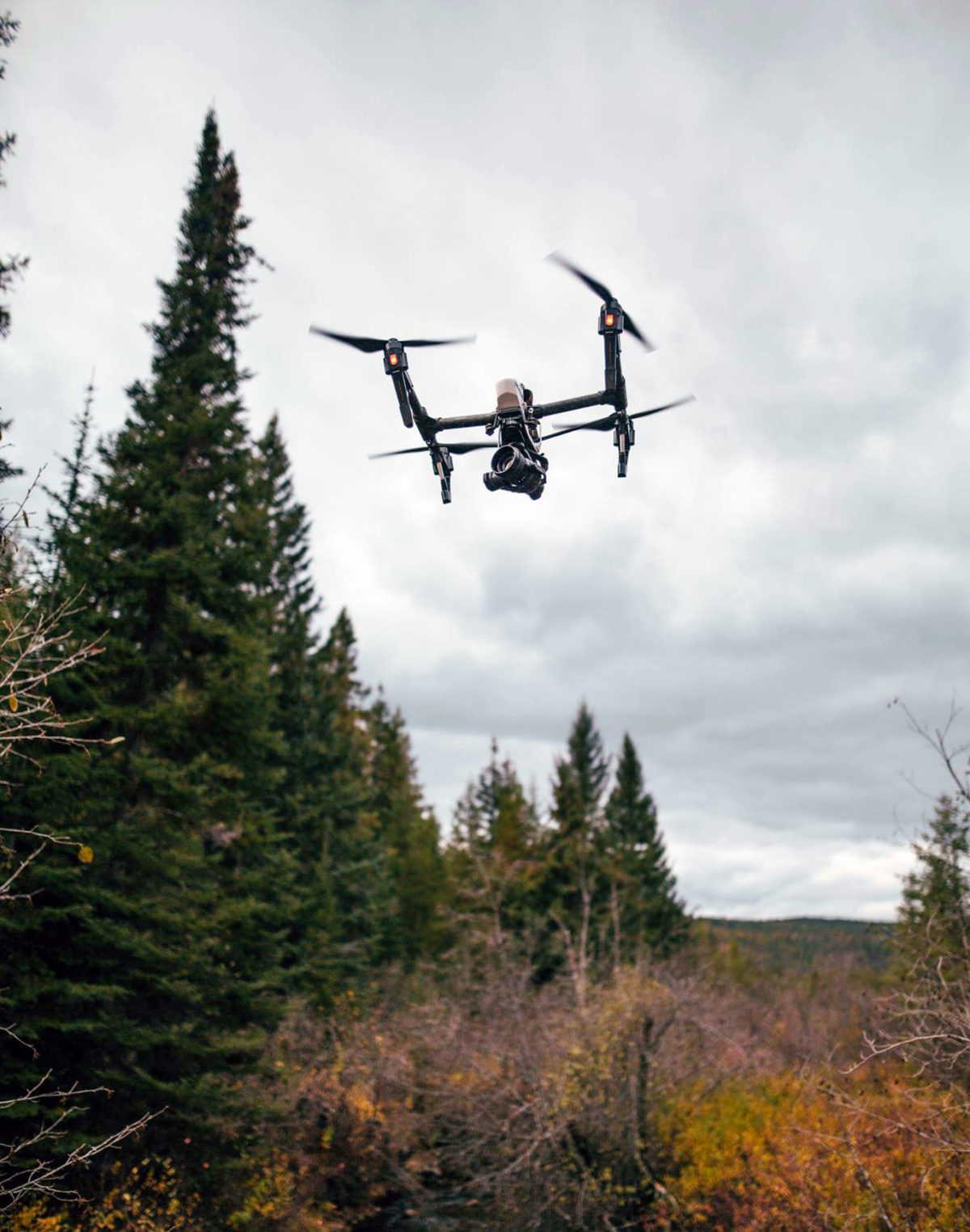 So… Santa Clause has been good to you, right? He packed up your drone and flew it all the way from the North Pole to Spokane, Washington. Chances are, you plugged in the battery charger immediately and can’t wait to fly it. Before you do, let’s look at some of the do’s and dont’s.

The greater Spokane region is full of manned aircraft, airports and restrictions. Before you go blasting off into the clear blue skies, it’s important to know what will and what won’t cost you a lot of money, and quite possibly… lead to criminal charges. Before I go into that, please let me provide a brief introduction:

I am Robert Rees. I am a career military helicopter pilot. I have flown the Bell 206, the Airbus EC-145 and the Sikorsky UH-60 Blackhawk. I am currently a Lead Representative for the FAA’s Flight Standards District Office (FSDO) FAASTeam in Spokane, Washington. The FAASTeam is a safety, education and outreach arm of the FAA that is staffed by professionals in a number of fields. We volunteer our time to the FAASTeam to provide public outreach and education. So, it is in that role that I author this post, and attempt to provide you with a bit of guidance before your flight activities lead to problems.

Where can you fly legally? That is an excellent question. I will start by referring you to the map below: 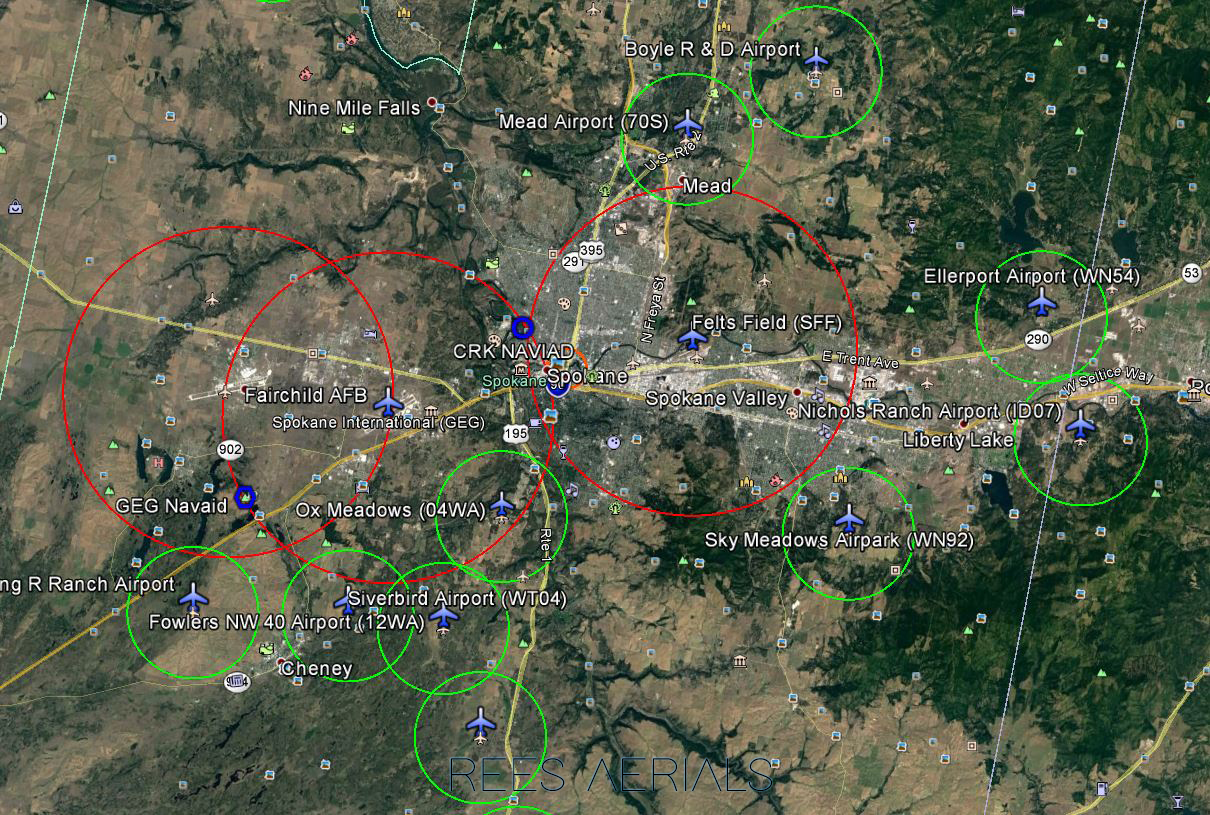 This is a map that I have created to plan all of my Small Unmanned Aircraft Systems (sUAS), commonly referred to as drones. As you can see, there is a LOT going on. What these circles represent, are areas with airports. If you want to fly your sUAS, it is important that you know where it is legal to do so. If you are within a red circle, you are NOT legal to fly. It is that simple. As you can see, that pretty much covery the entire city of Spokane and extends will into Spokane Valley to the east of Spokane, and well to the west of Airway Heights. The reason for this restriction are the airfields and services that they provide to manned aviation.

The map also contains airport that are not protected by surface based airspace as the ones above are. The red circles indicate a surface based airspace (where you absolutely prohibited from flying), and the green indicate recognized FAA airfields in the surrounding area. Whether or not the airfield is protected with airspace controls or not, you as a drone pilot are responsible for “Seeing and Avoiding” any manned aircraft. That is the reason that my personal map has a listing of all of these other airfields. Knowing about them helps me plan for potential aircraft conflict. To simplify this rule, you are the one that must be aware and avoid aircraft. Causing a manned aircraft to make an evasive maneuver, or alter its course to avoid you is a violation that could land you in some pretty hot water with our friends at the FAA.

If you have been looking into drone rules at all, you know that you may not fly your aircraft more than 400 feet above the ground level (AGL). So there is quite literally NO way that you can fly your drone anywhere within these red circles and be legal. These rules are not put in place to penalize drone operators. They are put there to PROTECT manned aircraft. Imagine one of our crummy weather days, where the clouds are thick and all over the place. Most manned aircraft can still take off, land and fly with sophisticated instrumentation and not get lost. Modern aircraft can typically fly themselves, so being in the clouds poses little risk outside of turbulence and icing. Now imagine, you are on an aircraft that is full of people, and you are performing an approach in Spokane International. You may not break out of the cloud layer until you are nearly on the ground. With a cruising speed of 150 knots, which is approximately 172 miles per hour, there would be literally NO time for a pilot to react to your drone and avoid a collision, if he even saw it at all. An impact with a 2 and half pound drone at 170 miles per hour would be catastrophic, and most certainly result in death of everyone on board.

So you ask yourself, how do I know where I can fly Robert? I can’t possibly interpret your map and take it with me everywhere I want to go! Hey, that is an excellent observation. Luckily for you, the FAA has put out an app that you can download to your smartphone or tablet. Just visit this website: Know Before You Fly. There is a wealth of information on this site for the would be drone pilot.

This post is not meant to make you an expert. It is a very simple overview of the protected airspace within the greater Spokane region, and let you have some situational awareness as to where you cannot fly. There are many more rules to be covered, and I will author various posts in the coming weeks to address some of more intricate details of becoming a remote pilot.